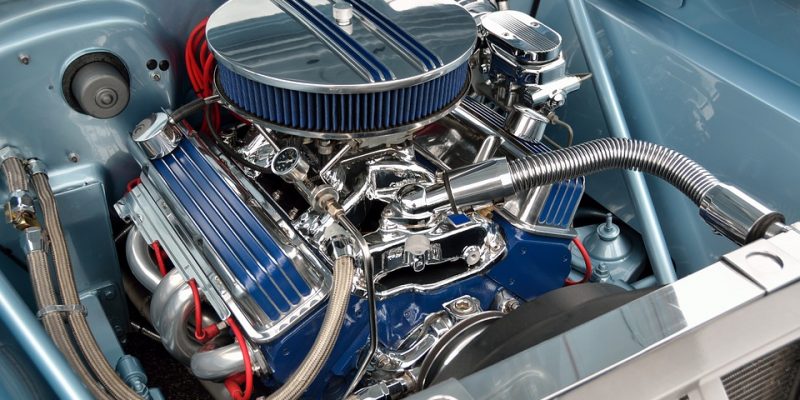 Total Base Number (TBN), sometimes referred to as Base Number (BN), is an important property of engine oil. TBN is a measurement of the alkalinity of the oil expressed in terms of the equivalent number of milligrams of potassium hydroxide (an alkali) per gram of oil (mg KOH/g). Unfortunately this tells us little about what TBN does in engine oil, or how much we need for effective oil performance and engine protection.

The prime functions of motor oil are to lubricate, clean, protect and cool the engine. Various additives are added to the oil to enhance these functions. Detergent additives in engine oil have two basic functions:

To do this the oil needs to be alkaline. TBN is a measure of the alkalinity additives in the oil.  Generally speaking, the higher the alkalinity (TBN) of the oil, the better is its ability to neutralize contaminants such as combustion by-products and acidic materials. Higher TBN oils are believed to be capable of neutralizing greater amounts of acidic materials. This results in improved protection against corrosive reactions and longer oil life. TBN levels are optimized for the intended application. For example, petrol engine oils typically have lower TBN values, while diesel oils must manage higher contaminant-loading from soot and sulfur, and therefore normally have a higher TBN. Modern high performance diesel engine oils typically have a TBN of 8 or more. Traditionally oils formulated specifically for extended drain intervals, displayed higher TBN levels to ensure proper corrosion protection for the duration of the extended interval.

TBN levels decrease as the oil neutralizes acidic contaminants in service. When the level reaches a point where it can no longer protect against corrosion effectively, the oil must be changed. Engine manufacturers’ maintenance philosophies vary as to when TBN should trigger a lube change. Some manufacturers recommend that when the TBN reaches 50% of the initial TBN, the oil should be drained, e.g. new oil TBN 10, drain at 5. Other manufacturers specify minimum TBN warning limits. Cummins for instance, stipulates the base number should not be allowed to drop below 2.5 mg KOH/g.
There is great controversy over when oil should be drained in mixed fleet applications. General advice is that this is not a real problem when engine oil with appropriate TBN is used for the fuel sulphur level.  Engine oil base number is not generally a reason to change oil in applications where fuel sulphur levels are low, e.g. on highway truck engines operated on low sulphur diesel. However the TBN should never ever be allowed to drop below 2 mg KOH/g.
Nowadays the main driving force for the development of new diesel engine oils is concern over the environmental impact of diesel engine emissions. New generation engine oils must provide optimum exhaust gas emission control system durability, while still offering peak engine protection. To protect emission control after-treatment devices, modern engine oils must contain lower Sulphated Ash, Phosphorus and Sulphur (SAPS) levels.  Although SAPS can poison exhaust gas after-treatment devices, it contributes significantly to oil alkalinity as well as oil performance. The reduction in oil SAPS limits has resulted in a shift from traditional engine oil technology to alternative additive chemistries.

We mentioned earlier that in traditional terms, higher TBN values are viewed as having the ability to neutralize more acidic contaminants than lower TBN products. This lead to the assumption that higher TBN products always allowed extended drain intervals. This, however, does not take into account TBN Retention of engine oil. The majority of motor oils currently on the market use a detergent package based on calcium, magnesium or a mixture of the two additives as their detergent package. It has now been proven that all detergent packages do not have the same ability to neutralize acidic contaminants in the long term. This has been proven in various laboratory tests and field trials. The significance of TBN Retention was once again demonstrated by a recent laboratory simulation, using sulfuric acid (H₂SO₄) to replicate acid build up during a drain interval from oil contaminants. The simulated test evaluated two oils with the following formulations:

The graphs below show a visual representation of the test results: 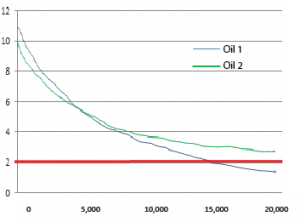 On completion of the 20,000 mile service simulation Oil 1 (traditional chemistry) dropped considerably more in TBN than Oil 2 (new technology). After about 5,000 miles the TBN of Oil 1 plunged lower than that of Oil 2. At 15,000 miles the TBN of Oil 1 tumbled below the 2 mg KOH/g warning limit. The TBN of Oil 2 never reached this threshold during the test. This laboratory simulation once again demonstrates the positive attributes of new developments in oil chemistry.

engine manufacturers. To find out more about this exciting new product, please visit and like our Facebook Page