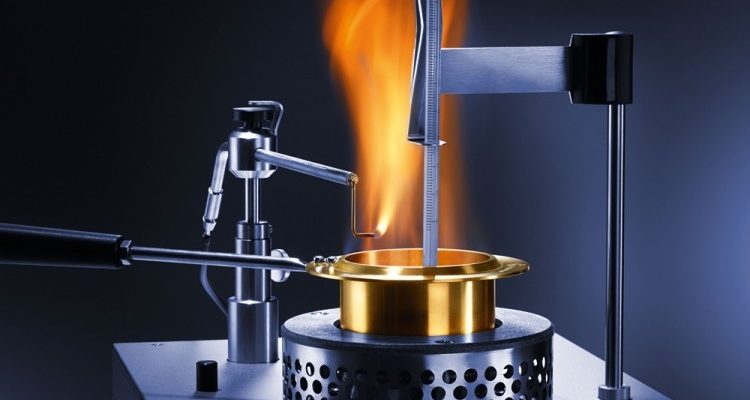 In this issue of OilChat we will endeavour to clear some of the fallacies surrounding Flash Point. It is often believed that the Flash Point of a volatile liquid is the temperature at which the liquid will ignite (start to burn) spontaneously without an ignition source. This however is not true. Flash Point is defined as the lowest temperature at which a liquid (usually a petroleum product) will form a vapour in the air near its surface that will “flash, ” or briefly ignite, on exposure to an open flame.

Flash Point is an indication of the flammability or combustibility of a substance. The lower the Flash Point, the greater the fire hazard. The use of the Flash Point as a measure of the hazardousness of petroleum products dates back to the 1 9th century. Before the advent of automobiles, paraffin was the most sought after petroleum product which was primarily used as fuel for lamps and stoves. At the time there was a tendency by petroleum distillers to leave as much as possible of the commercially ‘worthless’ petrol in the paraffin in order to produce more product. This adulteration of paraffin with highly volatile petrol caused numerous fires and explosions in storage tanks and household appliances. In response legal measures were instituted to curb the danger, test methods were prescribed and minimum flash points were set.

You may well wonder why we sometimes find a variance when we compare the Flash Points of two similar products. The answer lies in the test method used. Flash points are measured by heating a liquid to specific temperatures under controlled conditions and then applying a flame to the vapour above the surface of the liquid. The test is done in either an “open cup” or a “closed cup” apparatus.

In the open cup test the sample is poured into a test cup that is completely open at the top. A thermometer is placed in the sample before it is heated. The test flame is passed over the cup at every 2 0 C increase in the sample temperature. When the sample vapours ignite momentarily the Flash Point is reached. The most commonly used test method is the ASTM D92 Cleveland Open Cup (COC) test.

In the case of the closed cup test, the sample is placed in a test cup with a sealed lid that opens when the ignition source (flame) is applied. The closed cup traps all the vapours that are generated during the heating of the sample and the vapours are not exposed to the atmosphere as they are in the open cup method. It is therefore no surprise that the closed cup test yields lower Flash Points than the open cup test. The ASTM D93 Pensky-Martens Closed Cup (PMCC) test is normally used to determine closed cup Flash Points. There is no set conversion factor for these Flash Point tests but PMCC is generally 5 0 C to 1 SC lower than COC for lubricating oils.

Flash Point is often used as a descriptive characteristic of petroleum products, and it is also used to help portray the fire hazards of liquids. It refers to both flammable and combustible liquids. There are various standards for defining each term but it is generally agreed that:

Although Flash Point primarily characterizes the fire hazards of liquids, it can also be an indicator of the quality of the base oils used in lubricants. In days gone by Flash Point was not really an issue but since the introduction of lower viscosity oils, such as SAE 5W-40 and even SAE OW-30, it became a more important consideration. The thinner the oil, the lower the Flash Point and the greater the tendency for the oil to suffer vapourisation loss at elevated temperatures. This results in the oil to burn off on hot cylinder walls and pistons in engines and thereby increasing oil consumption. A PMCC Flash Point of 2000 C is generally recognised as the minimum Flash Point for engine oil to prevent possible increased oil consumption at high operating temperatures.

If the open cup test is continued at increased temperatures after the Flash Point is attained, a point may be reached where the vapour continues to burn after being ignited. When the sample vapour sustains combustion, the Fire Point is reached. The Fire Point of a liquid can therefore be defined as the lowest temperature at which the vapour continues to burn (for at least five seconds) after being ignited by an open flame. The Fire Point for petroleum products is seldom listed, while Flash Point appears on most product data sheets. Generally, the Fire Point is about 1 O O C higher than the Flash Point, but if the value must be known, it should be determined experimentally. It should be noted that Fire Point testing is not undertaken in closed cup apparatus.